The kids prefer flatter thinner pancakes, so maybe next time I will increase the liquid again and try for larger pancakes!
Posted by Donna at 10:05 AM No comments: 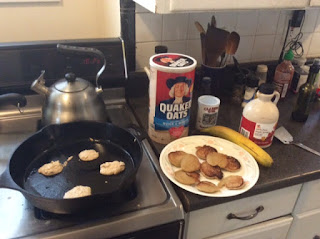 until a stiff dough is formed.  Knead, then roll into "snakes".  Once the soup boils, pinch off bits of the snakes into the water.  Cook until the pasta is done.
Posted by Michael at 7:53 PM No comments: