A pressure cooker makes cooking dried beans much faster. But... Don't be fooled into using one to pressure-soak soybeans for the purpose of making tofu. Something bad happens to the beans, and though the soymilk is tasty (and arrives quickly), it doesn't curdle! It is claimed that pressure cookers can help make tofu from soy flour, but I haven't tried that...
Posted by Michael at 4:43 PM No comments:

This recipe is quite popular among family and friends, and has become somewhat of a signature dessert for Donna.

First, make the crust. Start with

Donna notes that this is typically one "sleeve" of crackers. Mix in

and press into a pie pan with another pie pan, building up the sides (less on the bottom) beforehand.

over low heat (a double boiler or microwave is nice). In a separate bowl put

Take half of the mashed tofu and add

and put into blender. Blend for 15 seconds on high. Add remainder of tofu and all the melted chocolate to blender. Blend at least 2 minutes (longer the better, surely longer than you think, and add liquid as needed to make the blender happy) on the highest setting.

Pour mixture into pie crust, smooth with a spatula, and chill until firm.

Top with raspberries and whipped cream.

Donna notes that this recipe is quite flexible in terms of sizes and amounts of ingredients, and encourages trying other sweeteners, flavorings, etc. Brands have been noted, because this results in a vegan pie.
Posted by Michael at 4:19 PM No comments:

First harvest of the season! 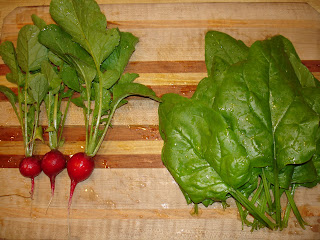 It's three radishes and 4 oz of spinach! (Truthfully, I had eaten 2 radishes prior to this...) This photo was taken a few days ago, and since then we've had lettuce and more spinach. The garden is indeed growing! Soon the broccoli raab, fennel, and green onions will be ready, and possibly some carrots, too!
Posted by Michael at 4:10 PM No comments:

This recipe is loosely based on what a number of internet sites claim has its roots in the Inca empire. Who knows if that's true, but this is a tasty way to get your quinoa... (And it's not terribly spicy.) Realize that corn, potatoes, and quinoa formed the basis of the traditional South American diet.

in some olive oil. (Of course, right there is Mediterranean influence, in the olive part, but I digress.) To this, add

and bring to a boil. Cover, and let simmer 15 minutes or so. Then add

and re-cover. Cook for a few minutes more, at least until the potatoes have cooked through. Top with

I should add that I left off a "secret" ingredient that one site claimed was for special guests -- guinea pig!
Posted by Michael at 4:01 PM No comments: 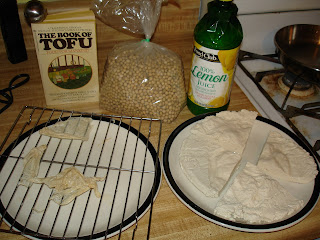 We were over at the house of our friends Beth and George last weekend for dinner. After the meal, I was holding Zachary, and noticed a book on their shelf:

William Shurtleff and Akiko Aoyagi, The Book of Tofu, Ballantine, 1975.

and started leafing through it. I was being rather noncommittal, but Beth asked if I wanted to borrow it. I said "no", but kept leafing for a while, and eventually changed my mind. Anyhow, it explains in great detail how to make tofu, and many things soybean-related...

To make an admittedly not very long story shorter (it is way past my bedtime), we ended up getting a few pounds of dried soybeans from the grocer. After soaking them while I was off at work (and a bit longer yet -- about 14 hours), I made my first batch of tofu!

In all, I blended

which were soaked in 6 cups of water for 14 hours. These were drained, and then pureed in the blender with

in two batches. The puree was added to

This was taken off the heat immediately after the puree was added. The mixture was passed through a colander lined with cheesecloth, and the solids reserved (for later, I guess. There are recipes for them...). The liquid raw soymilk was then put back on the stove, and brought to a boil. Once boiling, it was simmered for 7 minutes. At this point, it's drinkable soymilk! (Before this point, the raw soymilk/soybeans aren't suitable for human consumption due to the presence of an enzyme that inhibits protein uptake. Cooking destroys this enzyme.) And indeed, it was tasty soymilk!

At this point, I tried something from the book which didn't work. I added

about 2-3 tablespoons of drippings from damp sea salt

to enough water to make 1 cup. This was supposed to coagulate the soymilk. But it didn't work. So I tried a second mixture

and this worked! (Yes, I just added it to the rest...) There is a fairly delicate procedure where one adds the diluted juice slowly from the bottom up in the soymilk to avoid damaging the curds... I'll leave that part to the book. Anyhow, about 6 minutes later, there were copious curds floating about, and indeed the entire pan was probably a big huge chunk! I carefully transfered the contents to a cheesecloth-lined colander, wrapped them up, and placed them under weights (a large pile of canned beans and tomatoes). The pressing lasted about 15 minutes, while I cleaned up the kitchen. I cleaned one of the sink basins, and filled it with cold water. Carefully removing the weights, and sliding the works into the cold water, I was able to unwrap the now solidified block of tofu under water. I cut it into four smaller pieces, and the result is what you see! Freshness (and lateness of the hour) being what it is, this was possibly the best tofu I've tasted!
Posted by Michael at 12:35 AM No comments: