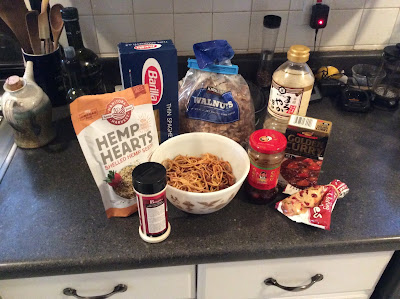 I roasted the walnuts in the oven and roasted some Hemp Hearts on the stovetop. (Hemp Hearts is a legal safe food product and has nutritional value and has no THC in it! They taste and look a lot like sesame seeds.) I used all the Golden Curry pack and most of a large "Thin Spaghetti" pack.  I used way more oil than probably I should have.  At that point, it was acceptable but it seemed to be missing something.  I added the cranberries for a little extra color and flavor, but the base flavor needed something. So, I added this soy sauce, some of this "Grandma Spice" (chili oil) and also some "Bakon" yeast, which I got at Amazon. The curry and "Grandma Spice" are from H Mart.  I think the Hemp Hearts are from the co-op. That's about as much as I can recall. I don't think I added salt or pepper.  (Accidentally, there is pepper in the photo as well as a lemon which was on my counter, but they were not in the noodles.)
Posted by Donna at 8:02 AM No comments: