Our soy yogurt adventures started sometime last fall, because we couldn't bear to be without Jack's soy yogurt. (Jack is Michael's dad.)  He makes his slightly differently, but all key insights were from multiple discussions with him.

Our original starter (about 10 generations or so ago?) is Dairy (and Soy) Free "So Delicious" Cultured Coconut Milk, unsweetened. I have a 16 oz container which I've only used once.  I may have to go ahead and eat it so it won't go bad!  It tastes very sweet compared to our yogurt.  Its claim to live cultures is: L. Bulgaricus, S. Thermophilus, L. Rhamnosus, L. Acidophilus, Bif. Bifidum, and Bif. Animalis. (They also have many thickeners in their product.)

As a side comment, it seems like everyone who talks about making soy yogurt on the internet copies someone else's blog who claims that it's impossible to go multi-generation with soy yogurt. This is just nonsense.  I don't know where this is coming from. Perhaps it all depends on your legal definition of yogurt, or perhaps it's just the usual echo chamber of the internet.  But this stuff tastes like yogurt to us, and it's really yummy, and we started it from coconut yogurt and it isn't dying off.  Jack has had his going for years off the same original starter. I did notice that if you start soy yogurt with dairy starter, it will start up more quickly, but if you are patient with your curds, there is no problem keeping this colony alive.

When I started the mother batch, it was probably late October and I just used a big heap of this starter in each of my two batches. I am big on using lots of starter (and now also whey).  I have also gravitated towards using the unsweetened Silk as it seems to work faster than the Original flavor (but with no appreciable difference in final product to me). 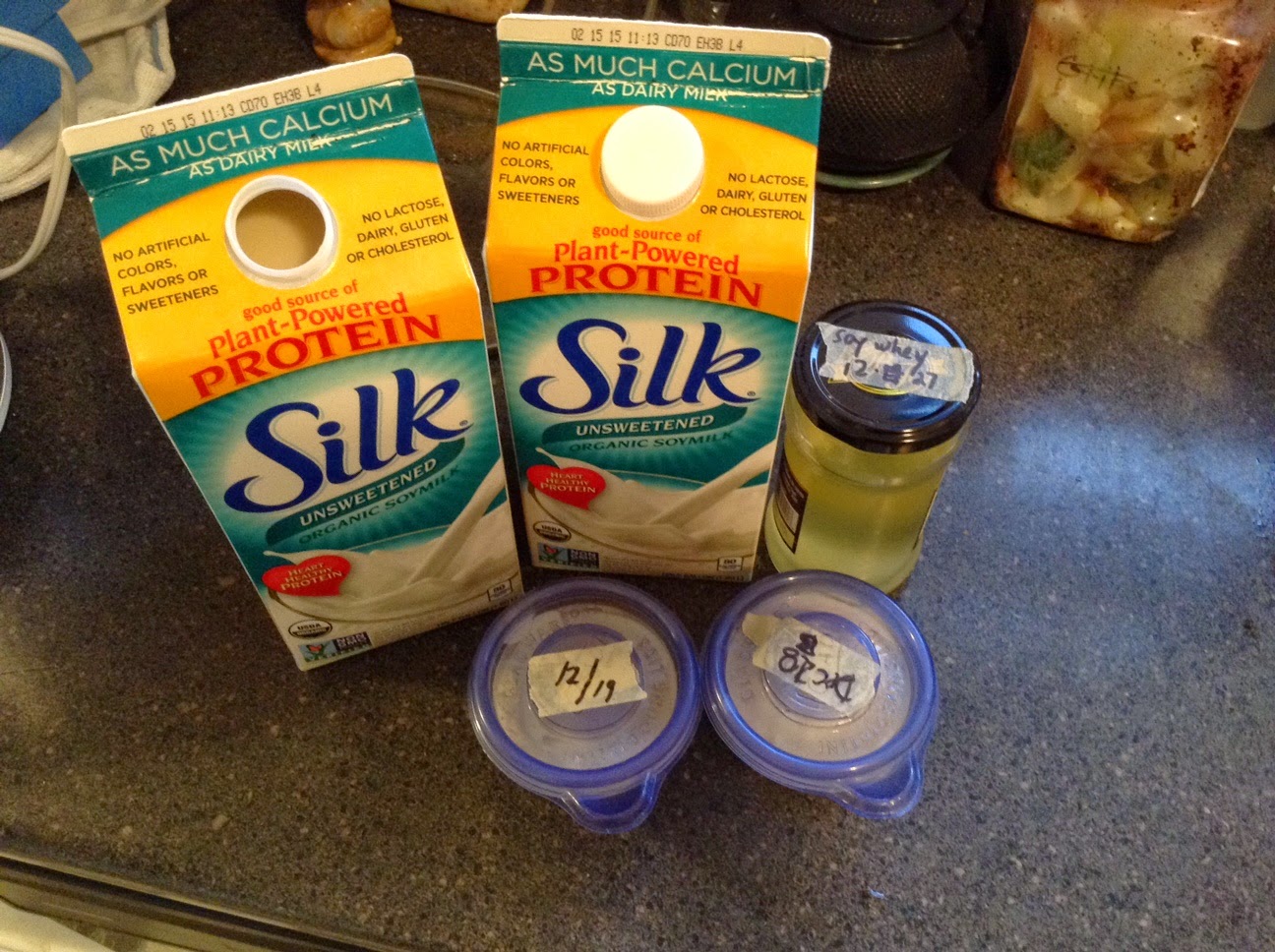 Next, I heated one container of milk on the stove until it was about 120F. 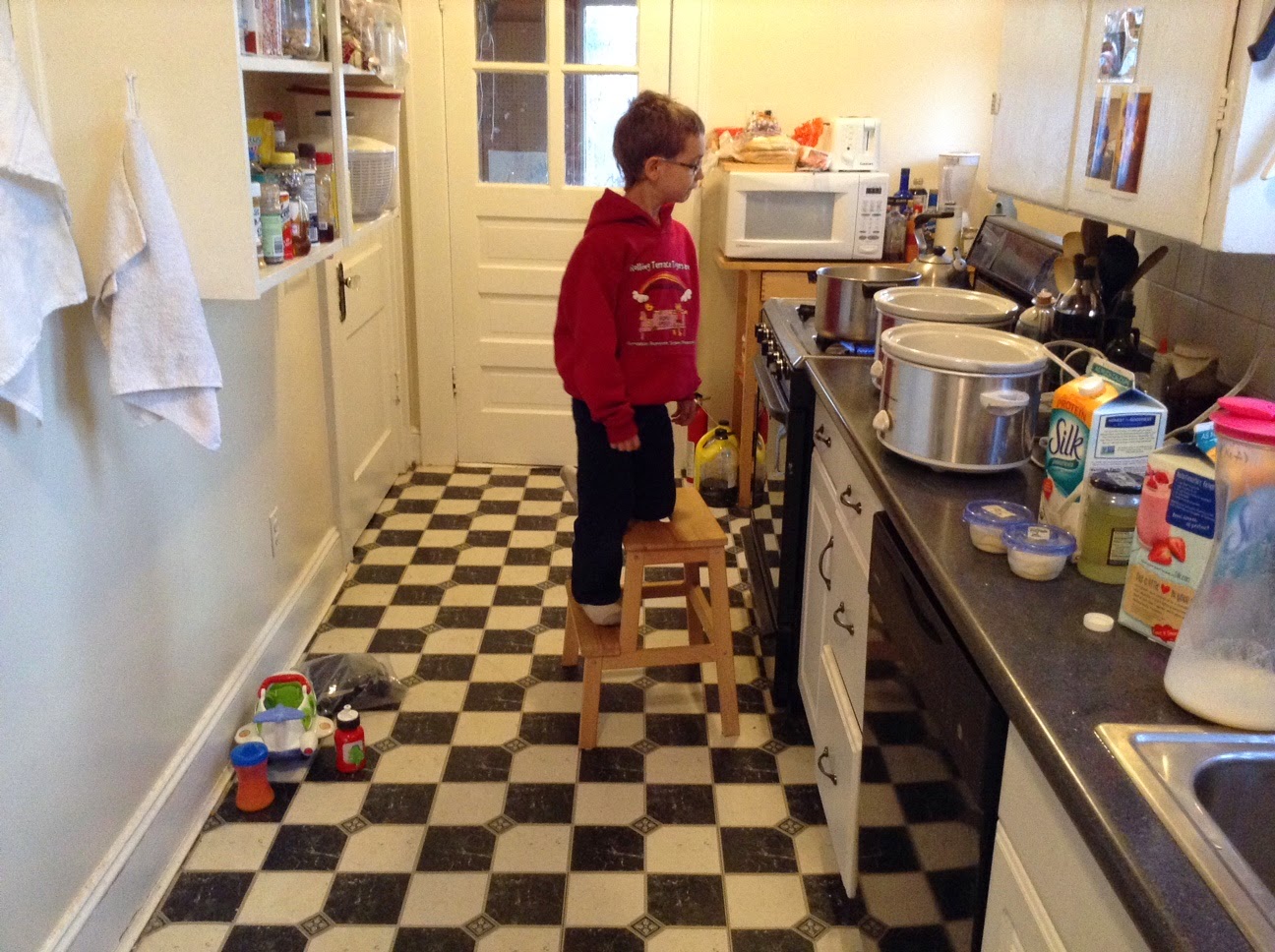 The two crock pots are connected in series, not in parallel. (I got the parts at Home Depot, but you have to know what you want. Even though I didn't ask for help, every guy employee was like "oh how can I help you???" and when I tried to explain what I was doing, they were like "huh?" It only requires a screwdriver, no soldering needed. But a wire cutter is a good idea.) 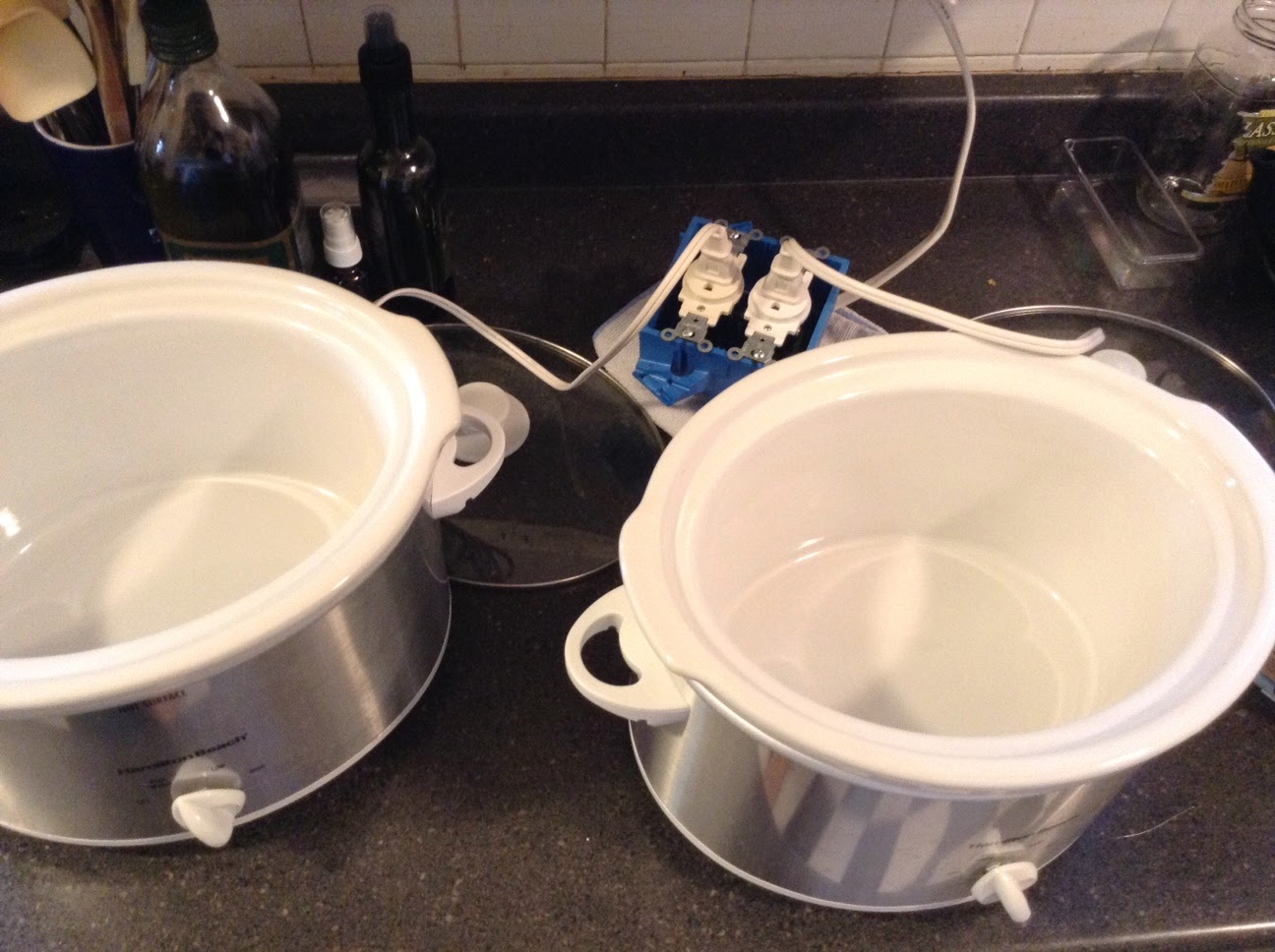 The cookware had been stored in the back room which was probably just around 40F at the time. So, the point is to get the cookware and the milk up to a decent sitting temperature.  Otherwise, you'll spend most of the day getting the heat up to that working range. Sometimes, I run the crock under hot tap water to bring its temperature up. The overall temperature ended up around 80F when I started this process at about 8am. I added about half a cup of whey to each crock as well as a couple/few tablespoons of starter.  Again, I mix starter from two batches.  I like to mix this up with a whisk or a fork at this point. It doesn't look like anything special yet, so I'm not posting a photo of that.

I left that sit (with the lids on) and both devices turned to their lowest setting (keep warm) all day long. It was about 5pm when I checked on it again, hoovering around 100F, and then it looked like this.  I could've gotten away with checking on it a little earlier, but later is fine too.  (This can be left to sit quite a long time.  Jack leaves his 36 hours.) What you want to avoid is getting the temperature up too high, so if it's getting high, just unplug it. 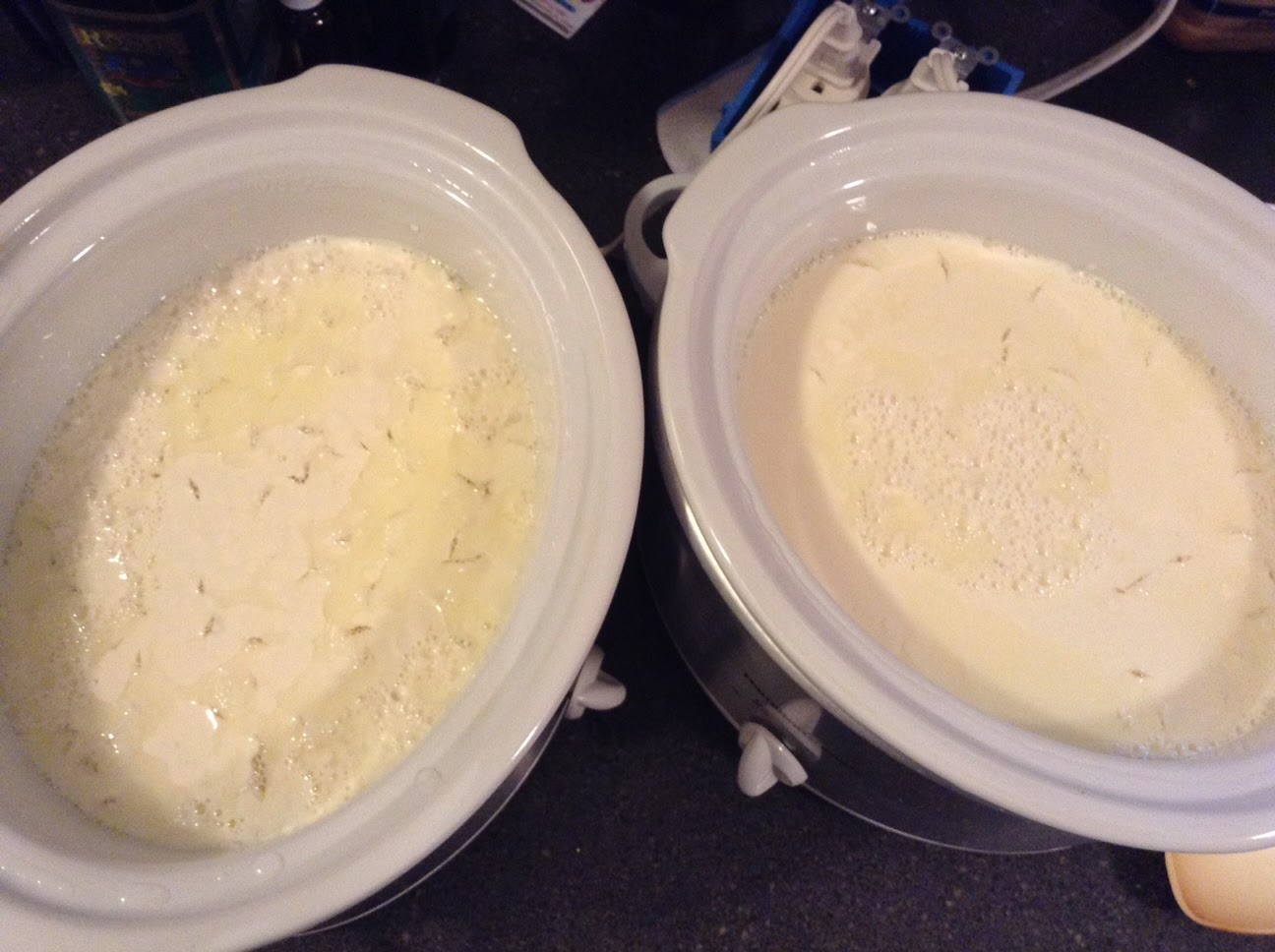 Since I didn't let it sit a very long time, the curds were quite soft and also quite vulnerable.  I scooped them out gently into my three strainers and covered them. The longer the curds spend developing, the harder they are, the purer the whey looks, and the tangier the yogurt is. You can see there is some sediment in this whey. 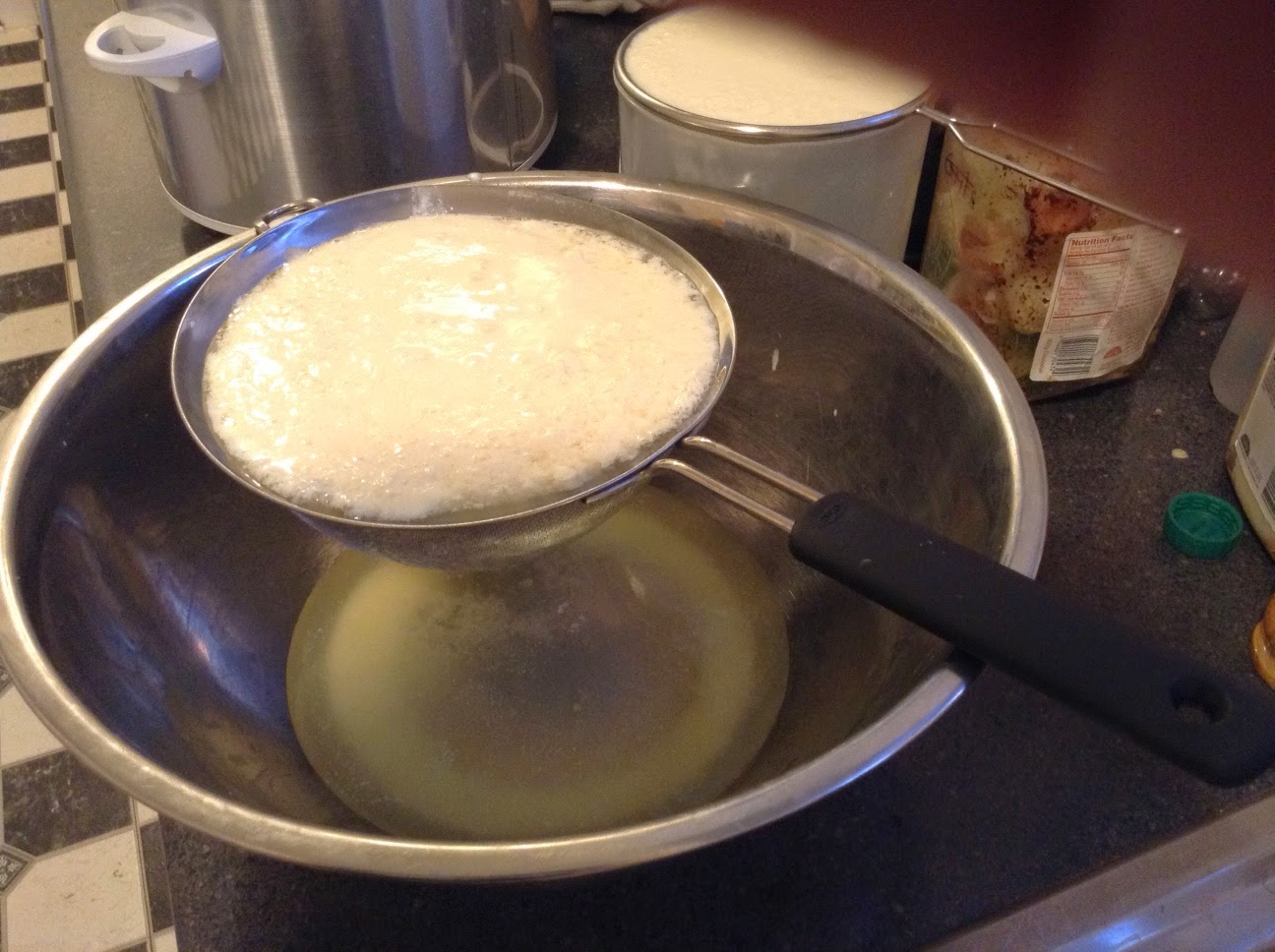 (If you are keeping an eye on it, you don't need to cover them, but I have flying teddy bears and other projectiles in my kitchen!) It took about 10 to 15 minutes to transition from the cookware stage to the straining stage. 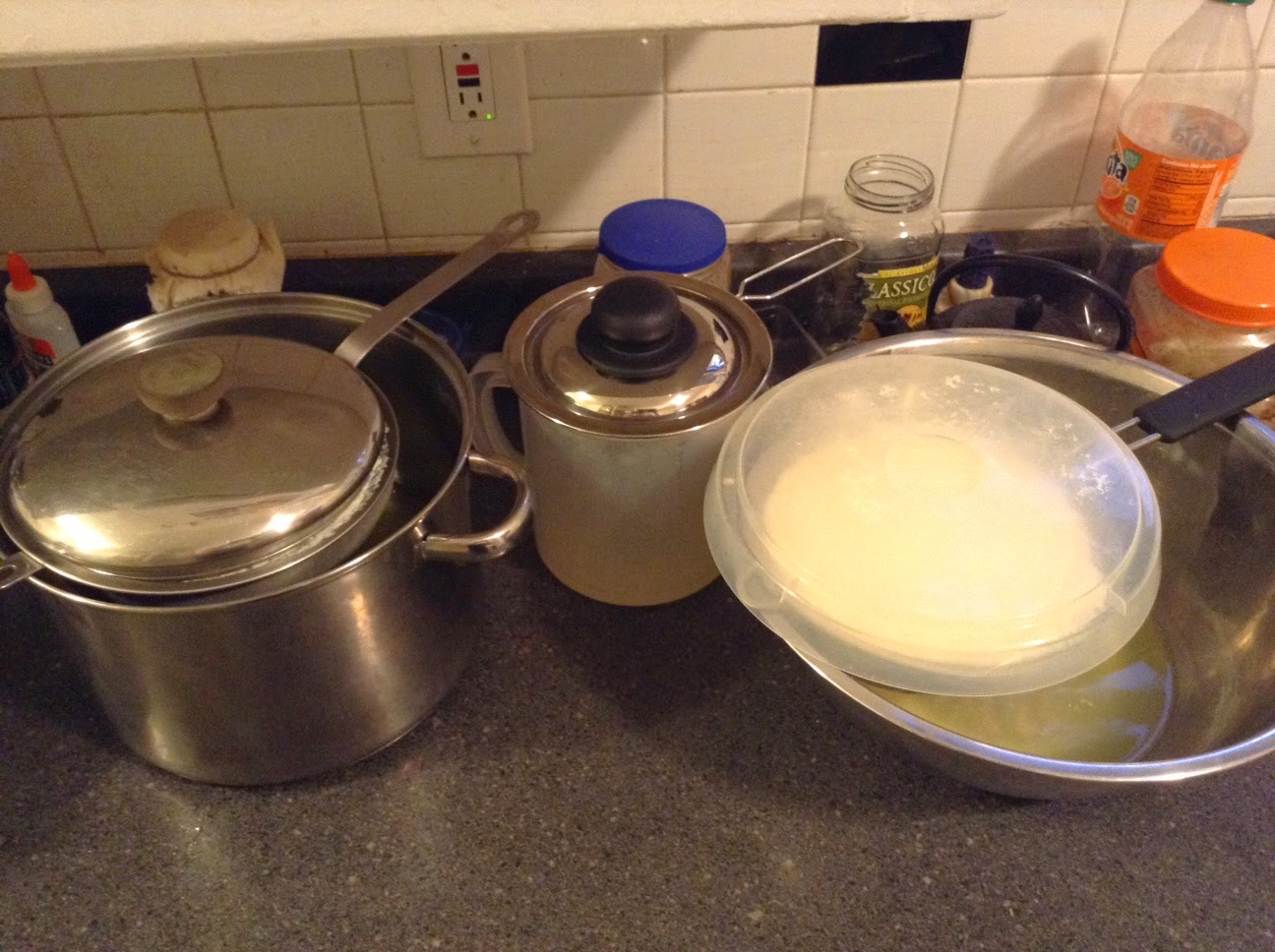 Finally, around  7:30 pm (I didn't have to wait this long, but it's a forgiving process) I saved off my 1 cup of whey for my next batch, and then continued counting off 8 cups of liquid and poured them down the drain.  I still had another cup left, which I saved for the next stage. The original milk containers have 8 cups each, so this is roughly a 50% reduction in volume.  It works fine anywhere near this value, and even outside of this range, but we tend to keep it near the 50% range.

Here, I'm showing the final stage.  On the left, this is what the product looks like prior to mixing, just scooped out of the strainer in the previous photo.  On the right, it is just after mixing. The leftover whey is shown in the middle, waiting to be called upon to adjust taste and texture. If you prefer a less tangy product but still creamy, you may simply add water at this stage to make that adjustment. The mixing is done in the storage container.  Regular yogurt containers are excellent for this process, but we also have a couple of "nicer" looking containers which actually don't work as well but are better for parties.  The mixer beaters go all the way down into the container, and they can hit the sides too. (Be careful near the top to turn down the speed so you don't splatter.) 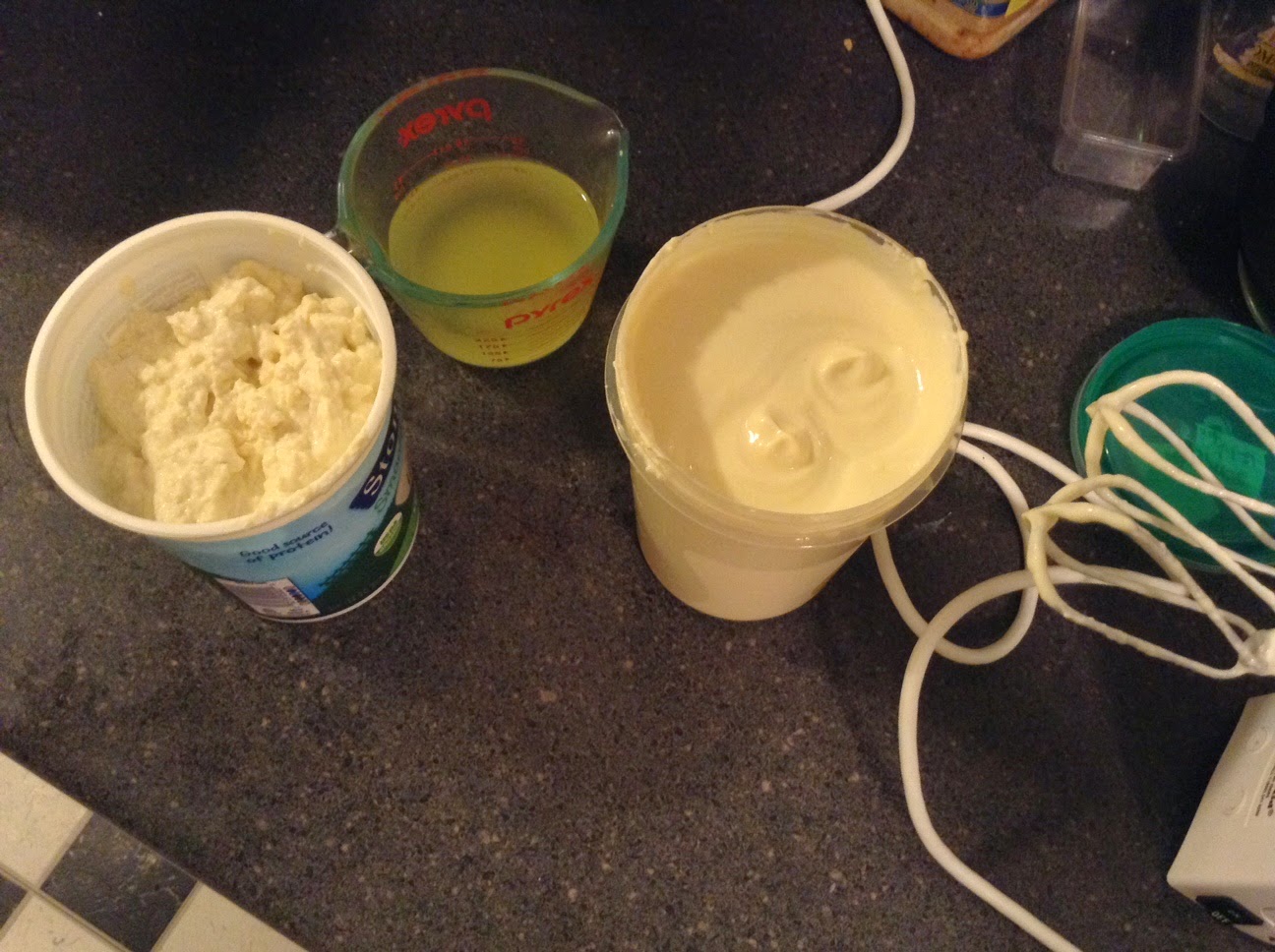 The flavor continues to develop in the fridge.
That's it!  Enjoy!
Posted by Donna at 8:45 PM No comments: